The new album antifonation from our Ukrainian artist strukturator is on PRE-ORDER NOW!

UNOIKI is extremely proud to say, that our album UNO-IKI-SAN is featured in it!

ANM describes itself as "A source for news on music that is challenging, interesting, different, progressive, introspective, or just plain weird", what we UNOIKIs really like.

Dr.Nojoke put together some of his personal highlights on UNOIKI
to celebrate UNOIKI´s third anniversary.

UNOIKI is honoured to host a stage for four hours on the famous Caprices festival in Switzerland.

Andrés Marcos, Storlon and MRZ will play at Caprices Aprés Ski on March 11th from 6pm to 10pm.

Caprice is an internationally renowned Festival in Crans-Montana, a resort in the Swiss Alpes.

The pre-order for our 3 years UNOIKI jubilee edition has started!

Today we revealed the artwork for the first CD of our upcoming double album UNO-IKI-SAN, with which we celebrate our 3rd anniversary.

We are excited, that our various artists album NEW CALEDONIA

is amongst the best albums of 2012 in Igloo Magazine.

New Caledonia is a welcomed foray of fragile, distinctive and home-grown electronics that merges rhythm and non-linear soundscapes with a panoramic vision of what it might be like to live in the middle of the Pacific. Danceable contortions and suitable arm-chair dissipation, UNOIKI have inhabited a space that transforms from one track to the next.

UNOIKI shows for the first time audiovisual works, which were produced exclusively for a DVD compilation on UNOIKI.

The first two videos are from Kabe and Silvana Rogazione.

UNOIKI is proud to announce a monthly showcase at the fabulous Studio R.

The new album from Dr.Nojoke "Unexpressed" got great reviews

and in the De:Bug magazine

On July 13th two of our unpublished videos had their premiere on the new and ambitious SOUND in MOTION festival, Toronto.

Kabe´s visual interpretation of Dr.Nojoke´s "Clonfixnature" and the film "The Snake" from Silvana Rogazione in collaboration with Storlon and the poet Etienne Cordonnier were both selected to be screened.

and The Fieldhouse radio (BRSlive, USA).

Igloomag, the leading webresource for underground electronic music for more than 11 years, introduces UNOIKI in its newswire.

"false" and "return" are featured in the episode 5 of the Hushlamb Free Range Show at Studiofeed, Toronto, by Zaid Edghaim!

"unserialize" was played by Yves Blanc in his broadcast "la planete bleue" on saturday evening, March 10th, on the Swiss national radio Couleur 3!

and put it out as a digital-only album!

more than 7 hours of music from

plus a free DJ-mix from

Also on the UNOIKI cloudcast!

The UNOIKI collective is extremely overwhelmed and feels honoured to be voted the "label of the year" in its very first year.

The US-American blog Infernal Techno wrote a nice review about us.

The show is over!

We are very proud about our very first exhibition (from Nov. 13th to Dec. 8th at Spielraum, Berlin) - showing the incredible graphic-design from Jonathan Mangelinckx.

click here for pics of the noise cube installation

Portable joining the live performance of MRZ at Bar25 wearing also a mask of MRZ :)

DERRICK MAY WITH UNOIKI FLYER 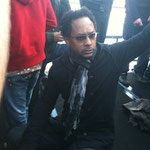 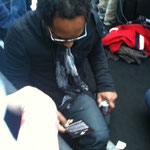